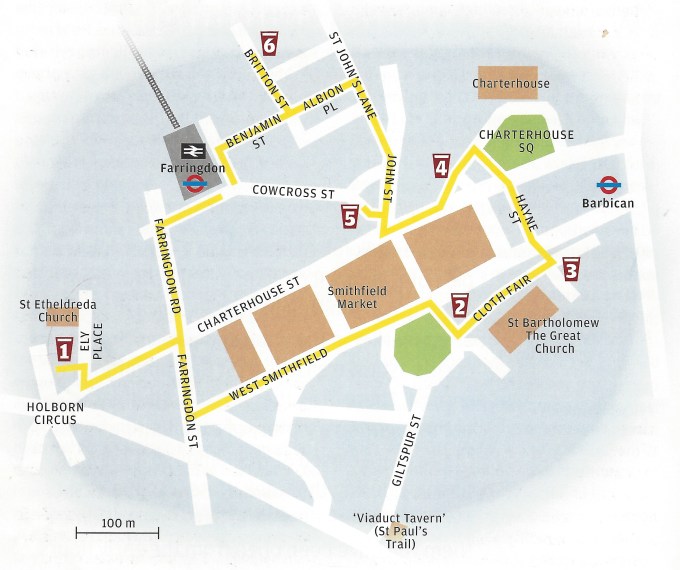 Richard and I are determined to avoid two things that spoil a pub crawl in London: to avoid the pressure on racing for the afternoon’s last off-peak train; and being civilised with the drink, i.e. eating something. On the last day of July, we have managed both.

For exercise we get off the train early at St Pancras International. As provincials, we admit to feeling the usual frisson of London, admire the new Crick building, cross impossibly busy Euston Road and walk down Judd Street, named after Lord Mayor Sir Andrew about 1650. At Handel Street we turn into the peaceful, 18th-century St George’s Gardens, a still-consecrated burial ground and an oasis in heavily built-up WC1 surroundings. This takes us to within a whisper of Gray’s Inn Road, but we turn right along Mecklenburgh Square, speculating about its German origins. (It’s named after Georges III’s Queen Charlotte of Mecklenburg-Strelitz.) Striking south we turn left at Theobold’s Street – once pronounced ‘Tibbalds’ – a route that James I used to get his entourage across the capital to Theobolds (sic) Palace in Cheshunt. Enough of this, we need to hurry down Leather Lane thence into Hatton Garden, where bulky, suited African men in dark glasses stand outside the famous jewellery shops.

On, on we are a few minutes late and just before Holborn sidle left into a slit in the wall and revealed is Ye Old Mitre. It’s five minutes past eleven. Originally built in 1546 but this version a modern 1772, it was until the 1970s, along with pricey Ely Place at the end of the alley, under the jurisdiction of Cambridgeshire. Two pints of London Pride please, but it’s the end of the cask and we have to wait, sitting uselessly without beer at a wooden table. As soon as they are ready we go outside, standing round a large barrel and isn’t that first taste just divine!

Next, we are walking up Charterhouse Street and through Smithfield Market, now on its last legs before property developers get hold of the latest bit of old London. Bartholomew Fair and Bart’s Hospital are in view but the Butcher’s Hook and Cleaver calls us in. Although a modern pub, with much open space ready for the suits and no guest ale, Fuller’s again does almost as well.

The doors to 12th-century Great St Bart’s place of worship ask for payment to view. We pass up this transactional spiritual refreshment in search of the other and saunter along Cloth Fair to The Hand and Shears, a wooden-floored yet well-appointed pub of Victorian vintage and very welcome Courage Director’s. Two pints and a packet of crisps cost exactly a tenner!

Exiting and now tending to mellow, we get to the top of Charterhouse Street, with its eponymous 13th-century monastery-turned-public-school, and the Fox and Anchor. Mahogany doors lead into an art nouveau interior with Doulton tiling, before us a long, straight bar with some partitions. Won’t remember what ale we are drinking but the barman is co-operative in turning down the noise that many people call music. The Fox and Anchor, and the Hope, a little further down the street, are Smithfield early-openers, at 7 a.m. and 6 a.m., respectively. The Hope, with a lovely sunburst window, is a one-roomed Victorian affair with Young’s, but no longer is it cosy for the piped noise drives us outside with our pints, or in my case a half.

Unlike on other crawls, we had determined that we should eat something, and in Cowcross Street down from the Hope there is fast food galore. Whatever we have fills us up; memorable it is not.

And so just into EC1 to the quirkiest pub of that day, some way along Britton Street named after Thomas Britten, an 18th-century charcoal merchant and singer who once performed with Handel. Jerusalem Tavern, originally 14th century is a tiny, tumbledown sort of place in a 1720s house, but modern-day equipped and whose full-tasting beer is from the St Peter’s Brewery of Suffolk, dispensed from wall casks. We sit outside in the rather too busy street, and muse upon the ending of our day.

A few minutes walking takes us to Farringdon station where a late afternoon train whisks us out of London. Richard and I congratulate ourselves on a delightful day’s drinking and scoffing, albeit within churlishly limited off-peak hours.