Saturday
Drove the 122 miles to Eurotunnel, plunged under the Channel, then 172 more to Hove, Antwerp. The exchange house is comfortable, solar-energised, with a scaredy-cat called Tjupke.

Sunday
Settled and stayed in on a bad-weather day. I made a rare (still with the fasciitis) 1.2 km walk along the railway line to the nearest tram stop, Oude-God.

Monday
Made a motoring (lovely, comfy, old-fashioned term) tour, crossing the border into Zeeland in the Netherlands, a 240 km-round trip. Crossed the 6.6 km tunnel under the Westerschelde and past Middelburg, stopped at Domburg on the coast, and walked on the sandy beach in a cold wind. Remembered how a few years ago we had done the same at Blakeney on the opposite side of the North Sea and stared out towards Europe. From there, crossed a long, long bridge from De Roompot to the area of Zuid Beveland with so many constructions of mighty tidal barriers. Luctor et Emergo (I struggle and I survive) is Zeeland’s slogan, aptly recalling 1953 when almost 1,900 people died in tidal floods, and the start of the massive land reclamation for which this little country is famous. Suzanne got excited at ‘tiny Dutch houses’, and especially windmills, sometimes squealing so loud it frightened the wits out of me, driving. Once we chased the sight of a windmill into some town or other, only to get lost and the sat nav no help; and a 1:300 000 map goes only so far.

Tuesday
To Edegem and Fort No. V, one of eight built in the 1850s and 1860s to defend the city, set on earlier Middle Ages’ fortifications. Heavily built, with wet and dry moats, thick walls and extensive overhead layers of soil, swiftly advancing technology of war quickly overcame their effectiveness. They were never under attack and these days most have fallen into disrepair.

Organised by our exchange partners, our guide, a Holland-born Belgian in his sixties with a Chinese wife, told us fascinating stories historically, socially, politically and in other ‘ilies. We learnt that the military intent of the forts was solely defence; for every hour the enemy was kept back, another activity elsewhere might save the day. I remembered the Intelligence Corps in West Germany in 1963/64, when my unit had only a theoretical four hours before being overwhelmed by Russian and East German forces. He was much impressed by this military defensive posture and said he would use it in his subsequent tours. (Long after disbandment, 4 Guards Brigade will live on in peacetime Belgium.) Two and a half hours of delight, inside dark alleys and cramped firing positions and outside on overgrown defensive embankments, no compromise for Suzanne whose walking gets better and better.

Then to pretty Lier, where harmonious marital systems broke down at lunchtime with an argument about where we would eat – even if we would eat. And once having sat down (I lost) drew great enjoyment from seeing another couple in the same street arguing about whether to enter our restaurant. At this place I ordered a ‘Highlander’ sandwich roll, which contrary to what I thought was herring, a great favourite of mine, turned out to be mostly of sickly sweet honey, sultanas and cheese. That part of the day did not go well.

Wednesday
To Antwerp, parking the car, taking a tram from Oude-God station, 30 minutes to Groenplaats in the centre. The Cathedral of our Lady charged €6 but was worth it, keeping riff-raff and numbers down, therefore blissfully quiet. Saw Reubens’s The Descent from the Cross, Mary in a brilliant red dress. At the Plantin museum, recommended by the redoubtable Bart, we learnt about Antwerp’s printing history in the sixteenth century. Plantin was a Reformation printer who produced books not only in his native Flemish, but also in 14 other languages, very different from the church’s control of literacy by way of Latin-only, which few could read. Good old Luther, some might say.

Thursday
We set out at 10 to walk to the tram, but I broke down with my chronic back pain, despite my heel feeling ok. Such a contrast with Suzanne who was keen, and very able to walk. Changed plans and drove 18 km to Mechelen, nice with a big town feel, yet also village-like. St Rumbold’s Cathedral houses a Van Dyke and a 25-panel depiction of the life and death of the saint, some including a kneeling ‘sombre and pious couple’; they had paid for it all, so got a mention on a panel or two. Even better was the emotive Kazerne-Dossin, a memorial to 22,000 Belgian Jews who were assembled there by the German occupiers, for dispatch to the camps. Quite a bit on Belgian agonising over the degree of collaboration, especially by the police. What would I have done? Pity about two noisy groups: one of grey hairs, and the other of teenagers every single one of them with eyes glued to a tablet. A nice little man in a moustache spoke kindly to us, asking how we felt about the museum. He showed me to the toilet, where my 50 cents placed in a saucer was barely noticed by the large, middle-aged lady who barely looked up from her mobile. Not just kids, then, are screen-fixated.
Friday
Quiet day in Antwerp climbing up and down creaky wooden stairs in the Rubens Huis. The many visitors included the almost-statutory Japanese girls clinging to each other, taking selfies and there was a group of quiet and respectful small schoolchildren taking instruction from their teacher in French. Outside, I kid you not, another little man with a moustache stopped us, pointing out what was the ‘Gestapo’s HQ’, but when I walked over to check, there was no evidence showing, Probably quite right, not to plaque evil.

Grocery shopping in Hove, a kind of Chelsea/Double Bay, for nice ingredients for dinner, since, to the despair of Suzanne, we shall eat chez nous yet again. Dinner will be coiled-sausage salad and massive-calorie cake topped up with fine Belgian beer. Tjupke’s noise had me up at 2, again at 4, so I rose, typed an email then back to bed.

News from another country: my sister texts that my 48-year-old cousin has died.

Saturday
At Eurotunnel, for the boarding queue and in the shuttle we were parked behind a car of five young men in football tops, beering, belching and swearing. Lovely – welcome back to Blighty.

Today
Looking back on this mixed week, from Europe I could see my country much diminished, administering economic suicide, pauperising its influence for good, riven as never before, ‘led’ by self-serving, ignorant, and weak politicians with a husk of a prime minister. Hail Brexit. 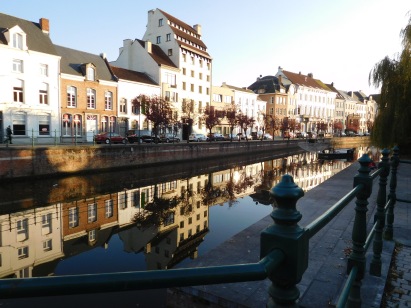