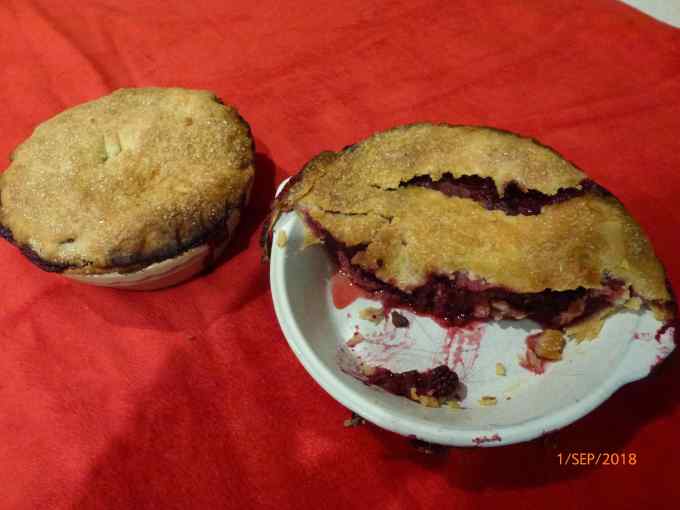 Legend has it that if you pick pick your blackberries after Michaelmas (29 September), the Devil spits on them. So, giving that horror a wide berth, we picked a few on the last day of August, and they ended up in two delicious apple and blackberry pies. From bramble to tummy was at most five hours.

We had tried at a favourite spot just outside town earlier in the week, but the problem was that it seemed to be a favourite for others as well; it was a bank holiday with people and cars everywhere. Racking my brains for lesser-known alternative, I remembered that while hiking I had seen several bushes on a little-used road out of nearby Steppingley, a couple of miles from home. Appearing in the Domesday Book, the village boasts a fine parish church in St Lawrence, built in the Early Decorated and Perpendicular styles of the fourteenth century. Not only that but also the village supports a cricket club with a fine pavilion and ground.

Judicious selection at the side of the road got us thirteen ounces of fine berries in plastic containers. Sadly, the ritual of blackberrying is diminishing, consequently for most there’ll be fewer childhood memories of stained fingers and clothes, not to speak of pricked skin and futile reaching on tiptoes for the highest delights. My own memories were set in September and often beyond the onset of Satan’s expectorating, since the fruit ripens later in Scotland where I spent most of my early life.

What are the benefits of eating blackberries? Among the claimed fruits of eating the fruit are improved immunity; weight loss; healthy bones, skin and eyes; digestion; and cognition. They also prevent endothelial dysfunction, which squeamishly I don’t want to go into. And I’ll be pretty pushed to get all that advantage from my annual consumption, typically a half share of this year’s harvest.

Pre-cooking tips are to soak them for an hour in water just before using them, then rinse well before eating. But they should be refrigerated unwashed. Just so you know.

Late August, given heavy rain and sun
For a full week, the blackberries would ripen.
At first, just one, a glossy purple clot
Among others, red, green, hard as a knot.
You ate that first one and its flesh was sweet
Like thickened wine: summer’s blood was in it
Leaving stains upon the tongue and lust for
Picking. Then red ones inked up and that hunger
Sent us out with milk cans, pea tins, jam-pots
Where briars scratched and wet grass bleached our boots.
Round hayfields, cornfields and potato-drills
We trekked and picked until the cans were full,
Until the tinkling bottom had been covered
With green ones, and on top big dark blobs burned
Like a plate of eyes. Our hands were peppered
With thorn pricks, our palms sticky as Bluebeard’s.
We hoarded the fresh berries in the byre.
But when the bath was filled we found a fur,
A rat-grey fungus, glutting on our cache.
The juice was stinking too. Once off the bush
The fruit fermented, the sweet flesh would turn sour.
I always felt like crying. It wasn’t fair
That all the lovely canfuls smelt of rot.
Each year I hoped they’d keep, knew they would not.