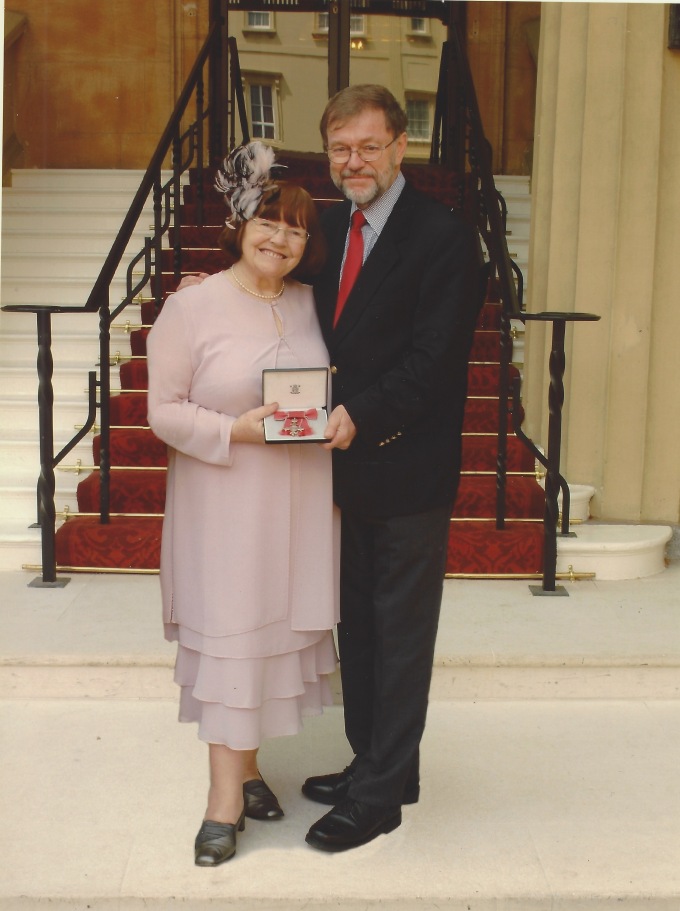 She had passed away in a nursing home on Saturday 8 June a few weeks after her 92ndbirthday. Lily was my last aunt or uncle. Well, there were only three to begin with.

Yesterday the 20th, we drove the 177 miles to Bury leaving at six in the morning  getting to the funeral director’s just in time to be second car following the hearse. Through the busy streets of Bury the route took us past Uncle Jack’s old house in Bell lane and a few seconds later past Lily’s in Bond Street, in which she had lived the last 40 years of her life. (Both these houses are owned by the council.) At one point as passed, a man walking a dog crossed himself. Our gentle procession left Bury for Radcliffe – broken only by having to give way to the siren and flashing of a fire engine – to get us to the crematorium and some fifty other mourners, including my sister and cousin. Since she was a lifelong non-practising Catholic it was a non-denominational service led by a beautifully-spoken Scottish humanist celebrant, who read out the eulogy written by Lily’s close friend, a local Conservative councillor (but I don’t hold that against her). The Lord’s Prayer did manage to get in somewhere. I also said a few nervous words ‘representing the Yates’ and declaimed Henley’s ‘Invictus’ as typical of Lily’s own indominable persona; I had read the same poem at Dad’s funeral.

What you have to know about her is that despite her mother dying when she was a child, her first husband in 1948 a bad lot, her second man (Uncle Jack) no better, never having owned her own house, occupation barrow girl, predeceased by son Christopher with schizophrenia so bad that he had been in a secure unit for it when he died age 53, despite all that she was an energetic leading light in charitable movements for the mentally ill and their carers. For this she was awarded the MBE in 2007 and one of the highlights of my life was being with Lily at Buckingham Palace when the Queen pinned the gong on her. Lily lit up any room she entered; she was one of the loveliest human beings I have known, and I loved calling her ‘aunty’.

Afterwards, at Elton Liberal Club’s Sinatra bar (how she loved Frank!) we handful of cousin-survivors from Mum and Dad’s marriage gathered. There were never cousins on Mum’s side but from Dad’s only sister came Joanne who lives and works in Melbourne, and Melanie, sisters of John who died two years ago, age 48. So, aside from a couple of spouses (no disrespect) there were three of us present, in age order: Chris, Amanda and Melanie. Thin pickings when you compare with other families.

(Our day had not finished. On getting back in the late afternoon, I received am email from a good friend to say that his 44-year-old-son had that morning been killed in a car accident. Grief upon grief.)

One thought on “Aunty Lily”